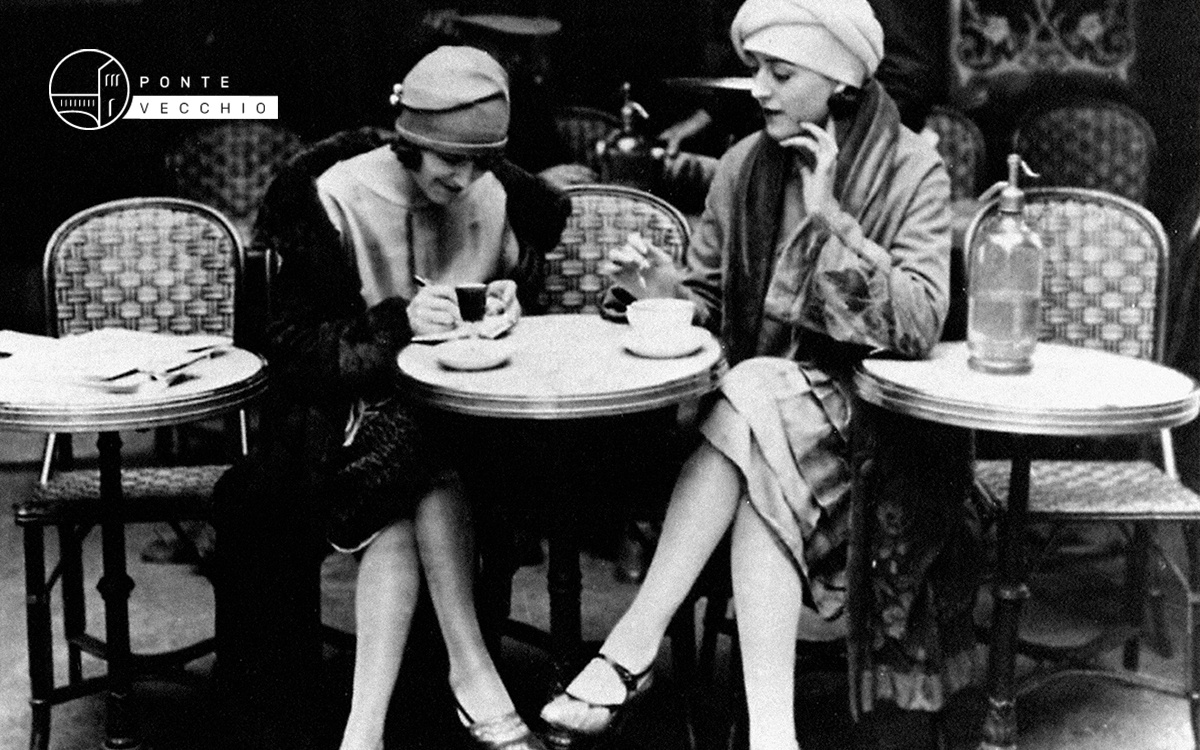 Round, square, with lively and joyful tones, the coffee machines built between the 1930s and 1970s are truly icons of beauty and style.

Like many appliances designed in the last century, they were built to last and provide optimal performance day after day.

The rounded designs, materials used, mechanical action, and innovative colours made them a must–have, and they continue to receive praise from many design and coffee lovers today.

In addition to being a symbol of Italianness, a vintage coffee machine recalls the “dolce vita”, evoking days of well-being and economic boom.

If the evolution of coffee machines reflects a moment of growth, of gestures that begin to solidify, of rediscovering sociality on a symbolic level, we are confronted with strange and unconventional items on an aesthetic level.

Our company has always respected tradition, upholding the workmanship and meticulous maintenance of each and every coffee machine.

As was the norm in the 1900s, we choose robust and precious materials, that can resist repeated usage without affecting the flavour of the espresso.

We chose to preserve the mechanical operation, which relies on the use of a lever and a piston, and only add adjustments to bring the machines up to date.

As a result, the appearance of our models is evocative of the style and elegance that defined previous coffee machines:

If you want an old-fashioned coffee machine to give a touch of elegance and charm to your home, know that it’s possible.

To select the best design for your tastes, read mor about our guide about coffee machines from the 1930s to the 1970s.

Coffee machines have improved in both design and performance over the last century.

Since the development of the classic Moka, the lever machine has become popular in bars and cafés.

Espresso has become one of the most popular and widely consumed beverages, distinguished by the characteristic cream on the surface.

In terms of design, we’ve progressed from heavy and sophisticated coffee machines to more flexible and functional structures. The early coffee machines had squarer forms, which were gradually replaced by more sinuous and colourful variants in the 1960s and 1970s.

The tones vary according to trends from delicate colours to red coffee machines.

The equipment has been without buttons or LEDs for several years, and the functioning is controlled by a lever.

Let’s take a deeper look at how coffee machines have evolved over the last century.

Coffee machine from the 1930s

During the 1930s, one of the greatest symbols of “Italianness” in the world was born: the Moka.

This traditional coffee machine is still one of the most loved to prepare coffee at home.

The Moka, originally named Mocha, like a famous Yemeni city, was invented by Alfonso Bialetti.

The percolation system was similar to what we have now, with boiling water passing through a filter holding ground coffee.

Water is poured into the boiler, which is located at the bottom of the coffee maker and is supposed to evaporate.

The steam rises inside the collector after passing through the coffee filter.

When it comes to the design of 1930s coffee machines, we’re talking about retro-styled equipment made of chrome and brass.

The end of the 1930s saw the reinterpretation of the French press in a more modern key.

A jug carrying a plunger capable of separating the coffee powder from the water was the machine’s distinguishing feature at the time.

Coffee machine from the 1940s

We’re in the 1940s, and the way we make coffee has evolved dramatically since the end of WWII: in fact, the manual lever coffee maker was introduced in 1947.

The water pressure rises quickly from 2 to 8-10 bar, and the amount of espresso in the cup becomes fixed.

One of the most prized qualities among coffee lovers makes its debut: the cream that distinguishes espresso from other types of coffee.

The cream on top of the coffee was initially not well welcomed by consumers. However, it became one of the distinguishing characteristics of a good espresso throughout time.

The birth of modern espresso coffee may be traced back to the 1940s.

Coffee machine from the 1950s

There were 2 different coffee machine evolutions in the 1950s.:

The Wigomat electric drip or filter coffee maker was created in 1954 in Germany and operated on a fairly simple principle: boiling water was run over a paper filter filled with coffee granules.

The resulting beverage was collected in a carafe and served right away.

The second change, which concerns us very closely, was the spread of the lever coffee machine.

Consumers began to embrace espresso culture during those years, and bartenders developed their own vocabulary.

In steel and brass machines, the lever is the distinguishing feature, therefore understanding how a lever coffee machine works is essential.

Coffee machine from the 1960s

In the history of coffee machines, the 1960s was a watershed moment. The piston machines that had previously been employed were replaced with lighter, more inventive equipment.

The extraction technique no longer relied solely on the bartender’s strength, and equipment with motorized pumps capable of attaining the 9 atmospheres required for espresso preparation became widely available.

The water was first delivered directly from the tap, then flowed through the boiler. The water was heated using a heat exchanger that was capable of bringing the water to the desired temperature.

In terms of design, 1960s coffee makers were lighter and more adaptable than previous models, smaller but capable of producing excellent-tasting drinks. They were small and rounded pieces of equipment with two dispensing groups and knobs to heat the water.

Coffee machine from the 1970s

In Italian society, the shift from the 1960s to the 1970s marked a period of great prosperity. As a result of the economic growth, a wide range of household gadgets and coffee machines for home have begun to be mass-produced.

As a result, the coffee machines of the 1970s lose their artisan features and become standardized goods built on a production line.

The main change is in the hydraulic unit: to make coffee, simply hook the filter holder onto the machine and turn it on.

During this period, every establishment had a professional coffee machine, and espresso has become the signature drink of Italian bars.

Meanwhile, beyond the sea, the electric drip coffee maker takes hold, displacing the conventional methods of preparation that had previously been used.

There is little to say, the old style still excites today

We learned from our trip through the history of coffee machines that the drink served today at the bar counter or at home is the culmination of a century-long evolution.

It was not only the aroma of the coffee that changed, but there were also ongoing technological advances.

And what about the design?

Coffee machines became very popular during the 1900s, and they eventually found their way into the kitchens of all Italians.

Vintage coffee machines have become a real piece of furniture for any home’s kitchen corner in recent years, becoming one of the most popular household appliances.

What makes a retro or vintage coffee machine so special?

The devices made from the 1930s through the 1970s, on the other hand, are fascinating because of the sensations they may produce.

When someone thinks of the 1950s, the economic growth conjures up images of newfound prosperity and the purchase of the first appliances.

Family travel began in the 1960s and stopping for coffee at a highway rest stop became a ritual.

The vivid colours of the 1960s and 1970s, on the other hand, stand out, and red coffee machines best reflect that era.

On the other hand, the temperature indicators and the bright colour of the steel harken back to the 1930s and 1940s, evoking the ambience of old cafés.

Each of these components appears to intensify the aroma of the coffee.

Having a coffee machine with rounded or vintage shapes in your home enhances the area, adding a unique touch to your kitchen or company’s break room.

Bright tones and pastel-coloured coffee machines can be mixed and matched with any sort of decor to make it more joyful and energetic.

For almost 20 years, Pontevecchio srl has been manufacturing professional coffee machines. Our company was founded by the will of a group of entrepreneurs specializing in the creation of espresso machines and is the descendant of Salvatore Marino’s Sama, which has been working in this area since the 1970s.

With such a history, we’ve always wanted to keep the coffee tradition alive by introducing tiny upgrades to equipment that is already durable and functional.

One of the elements that characterizes all our models is the choice of materials. Unfortunately, we live in an age where household appliances, like many other everyday goods, have a short lifespan and are thrown away after the first failure.

Our espresso machines, on the other hand, are built to last and resist wear.

We use only the most durable materials, such as steel and brass, like with the coffee machines of the 1930s.

This also makes them easier to repair in the unlikely event of a breakdown or damage.

The lever, which is single in the one-group Export and Lusso models and double in the two-group Luxury model, dominates the machine, evoking the ambiance of cafés and early bars around the turn of the century.

The Lusso model has a pressure gauge on the front that measures the water pressure inside the boiler. The machines of the 1950s, famous repositories of aspirations and rediscovered well-being, come to mind when considering such a useful addition.

Discover our models if you’re looking for a nice, retro coffee maker that makes fantastic espresso!

Pontevecchio lever coffee machines transport you to the golden age of the past century while adding a sophisticated touch to your kitchen’s decor.