Iced coffee: its history and the recipe to prepare it at its best 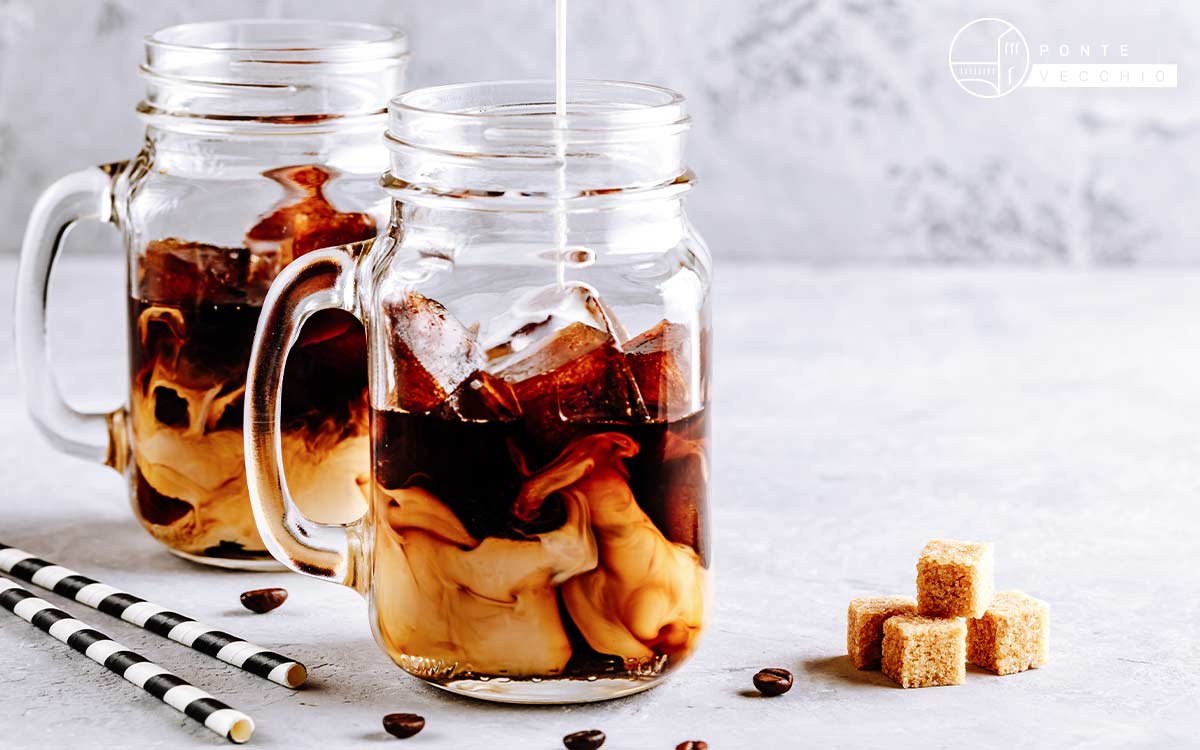 For some people it is a treat, a pampering, for others it is a habit: coffee is one of the breaks we are used to taking every day.

But when the cities get hot and the temperatures soar, not everyone likes hot coffee – quite the contrary.

Summer is the perfect season for cold coffee! This drink is very tasty and pleasant in times of intense heat.

The glass, with ice cubes and espresso coffee is one of the most popular drinks in Italy. But for several years now, espresso with ice in all its variations has been spreading in every country as a drink to be enjoyed at any time.

Cold coffee can also be prepared at home and stored in the fridge. Many people have the habit of storing morning coffee, or coffee from the previous day, in glass bottles and keeping it aside. But cold coffee is a real art, and to enjoy it at its best, a few small tricks are needed.

There are many variations of iced coffee in the world, but the main ingredients are two: a high quality coffee and a professional coffee machine – preferably a lever machine – that enhances its characteristics.

Let’s take a little dive into the history of this drink and its variations and see what our recipe for iced coffee to make at home is.

There are no records and very few documents that mention cold coffee. So we don’t know much about the history of iced coffee.

Over time, this drink has spread all over the world and different peoples have reinterpreted it according to their own culinary traditions.

According to one of the most reliable theories, the ‘original iced coffee’ originated around 1840 in French Algeria. ‘Mazagran‘ was a drink made from coffee syrup, cold water and sugar. Its name is linked to the legion of French soldiers in Algeria who invented it.

When these soldiers returned from Africa, they brought the coffee recipe with them and introduced the concept of cafés to France.

Since then, many recipes and variations of iced coffee have spread around the world.

Among the most popular versions are frozen coffee drinks, similar to the Italian granita coffee, and coffee prepared and then iced.

In the 1920s, iced coffee boomed thanks to a marketing campaign by the Joint Coffee Trade Publicity Committee in the United States.

But its worldwide diffusion came with the birth of large chains such as Burger King, Dunkin’ Donuts and Starbucks, which built an empire on coffee.

The most common iced coffee variants in the world

Although the origins of iced coffee are linked to French Algeria, there have been many versions of this drink around the world since the second half of the 19th century.

One very tasty iced coffee recipe originated in Vietnam, Cà phê đá. Vietnam is one of the largest coffee producers in the world, so there is bound to be a version of iced coffee. In this recipe, in addition to coffee extracted with a French press and ice cubes, condensed milk is used to sweeten the drink.

Around the beginning of the 20th century, coffee and its cold version began to spread throughout South America. In Chile, one of the most popular iced coffee recipes was born: Café Helado. This version is made with espresso, ground coffee powder, chantilly cream, cinnamon, vanilla, dulce de leche and chopped almonds or hazelnuts. If this is not enough, vanilla ice cream can be added to the basic recipe. Today, these ingredients can be mixed and matched according to taste, with everyone choosing their own favourites.

From Australia comes a more commercial version of coffee on the rocks, with the addition of ice cream and whipped cream. Syrup, cocoa, cream and coffee beans are also available as ingredients in this mix.

In Europe, a pleasant version of iced coffee is the Café del Tiempo, of Iberian origin. This drink made of long coffee, ice and citrus fruits is typical of Valencia and Andalusia.

According to a legend, the birth of the Salento version is linked to Spanish iced coffee.

Salento coffee with ice, therefore, has Iberian origins and its spread to Italy began in the city of Otranto.

Leccese coffee is made from coffee and ‘picconato’ ice, coarsely chopped ice fragments that resist when they come into contact with the hot drink. In Salento, they like to add almond milk as a sweetener to this version.

The most popular cold coffee drink in northern Italy is shaken coffee. This variant is prepared with long coffee and ice, which are then shaken. Sugar is used for sweetening.

A popular version throughout Italy is the coffee cream, a cold mixture of coffee and cream that can be enjoyed like ice cream.

For coffee lovers, a Sicilian classic is the Sicilian coffee granita. This version is particularly popular with coffee purists because it retains its characteristics. It is traditionally served with cream and brioche, strictly at breakfast. The only pity is that it can only be consumed on the spot.

If you can’t make it to Sicily, another Italian classic is the coffee granito amalfitano. This drink is served semi-liquid with the addition of ice crystals. Processing is simple, just stir the coffee while freezing.

The recipe recommended by Pontevecchio

Travelling all over the world to taste different versions of iced coffee would be wonderful. But also at home it is possible to make a tasty iced coffee to be enjoyed every day and at any time of the day.

Here is our favourite recipe from Pontevecchio.

Making iced coffee at home is very simple, but with a few little secrets you can make a pleasant and refreshing drink that can be enjoyed at any time.

First of all you need to prepare the espresso coffee and let it cool down.

Then you will need a tall glass (the glass allows you to see the milk mixing with the coffee and ice cubes) and a long spoon to mix the ingredients thoroughly.

Fill the glass with ice cubes and pour the coffee at room temperature into the glass.

Add the milk and sweeten to taste. Stir well.

Iced coffee is one of the most popular drinks in summer. Its fresh taste and the aroma of coffee that overpowers all other ingredients make it a favourite choice during hot weather.

We do not know much about the history of iced coffee, which, according to some sources, was invented in the mid-19th century in a French legion in Algeria and then spread throughout the world.

Other reports place the origins of iced coffee in Asia, in Vietnam. Vietnam is one of the world’s largest coffee producers, and the recipe spread from there to South America in the early 20th century.

There are many variations of this drink in the world, from the Chilean Café Helado with the addition of Chantilly cream and ice cream to the Café del Tiempo of Iberian origin, to be enjoyed along the streets of Valencia.

In Italy, the oldest and most famous version of iced coffee is from Salento, with the addition of almond milk.

But each region has its own typical recipe, with tasty variations. The best known are the Sicilian granita, shaken coffee and Amalfitan granite coffee.

It is also possible to make an excellent iced coffee at home, as long as you have the right recipe, a good quality coffee blend and an espresso machine that preserves the aroma.

The Pontevecchio lever coffee machines allow you to have a coffee as tasty as that of the bar, even at home.